The bona fide legend of reggae visits the LiVe venue for the special occasion .

There are few people as fundamental to the progression of reggae as Lee ‘Scratch’ Perry. Certainly none still living. The iconic producer is set to visit the UK this spring and will be playing a live set in Preston on his 83 birthday. Lee Perry and his band appear at Preston LiVe on Wednesday 20th March.

Lee Perry started his career working under some of the then greatest reggae producers of the day, firstly with Clement Coxsone Dodd at Studio One in the late 50s, then with Joe Gibbs in the early 60s, before setting up his own Upsetter Records in the late 60s with its house band The Upsetters. It would be the first of a stream of revered record labels of the period which Perry would helm as he hit a rich streak of studio successes working with artists like Bob Marley & the Wailers, Junior Murvin, the Heptones, the Congos and Max Romeo.

Despite suffering setbacks such as losing members of The Upsetters to Bob Marley and The Wailers and the destruction of his Black Ark studio in a fire, Perry’s tireless work in the studio ensured that the 70s would establish his legend forevermore. His innovative studio techniques were fundamental to the progression of reggae and the founding of dub as a sub-genre within the music. With the latter, he would change the face of music production in all genres forever.

Following time spent in the UK and USA in the 80s, Perry finally established himself as a live act, particularly with the “Time Boom X De Devil Dead” album, recorded with Dub Syndicate and “From The Secret Laboratory”. He has remained a popular and often bizarre stage presence ever since. 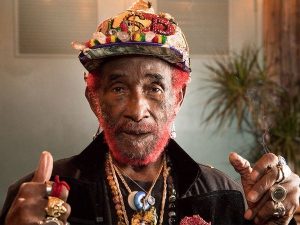