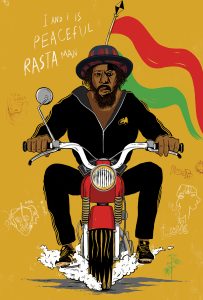 The style known as Rockers began in the mid 1970s created mostly by the then Studio One, house band called “The Revolutionaries.” What became known as the Rockers Rhythms were essentially modernized versions of Rock Steady classics from Studio One from the previous decade. Sly Dunbar and Robbie Shakespeare, the bass player

and drummer, went on to perfect the Rockers as a more militant style than the popular One Drop. Soon others were copying this harder, more militant and more mechanical sounding rhythmic style.  The dynamic duo of Sly and Robbie continued to build their fame by backing artists like Peter Tosh and Black

Uhuru with their aggressive rhythmic style. They eventually formed their own record label known as Taxi Productions.

The Rockers style was accompanied by a variety of lyrical subject matter, but tended to be more militant and direct than most One Drop lyrics, to go along with the harder feel. The

team also had quite a few commercial hits including the Mick Jagger/ Peter Tosh hit, “Walk and Don’t Look Back.”

The hard style also lent itself very well to dub versions, and riddims that were eventually to become classic Dance hall riddims for DJs and toasters to rap over, thereby helping to further evolve those styles.

The drums are played harder in Rockers with a full regular snare drum clap instead of a side stick. The snare was often played with the drumstick upside down, with the fat side of the stick hitting the skin of the drum with a full smack on the third beat. The availability of microphones on each drum gave the live sound engineer the freedom to add a variety of effects to the snare drum, effectively dubbing a band live.  The kick drum is most often covering both the first and the third beats and sometimes, for an even more militant effect, on all four, quarter note beats. The Hi-Hat is more often played as straight eighth notes or even sixtee

In Rockers, the drums work directly with the bass creating a unique riddim that drives the song forward with insistence on every beat and usually at a faster tempo than most One Drop songs.       The bass player still usually covers the first and second beats with steady quarter and eighth notes and usually leaves some beats open, which fits in with the characteristic of open space rhythm that works for all types of Reggae.

The rhythm guitar player, like in One Drop style, is chopping on the second and fourth beats, sometimes with a double stroke but more often with a single stroke. The lead guitarist often has the freedom to riff improvisde  around the empty spaces. The result of all the insistent rhythms is that Rockers are driving dance beats, which also contributed to their success.

The keyboard plays an important role in Rockers as well.  It can sometimes skank or chop on the second and fourth beats along with the rhythm guitar. A piano voice is usually used here.  Other times it can be used with a synth sound instead of horns, (saves money). It can even play bass lines, especially in dancehall.

Another unique rhythm that is strictly for keyboards is referred to as The Bubble. The Bubble seems to say “The Bubble,” (or a-bubble). Usually the keyboardist will be playing the bubble in such a way as to appear to be hitting the keys like you would a hand drum, with a left-right-left staccato motion.       The strongest beat is the middle one, or the high, triad chord which lands on the second and fourth beats like the guitar.       It can be counted, and-two-and, and-four-and.  This rhythm acts like another layer, taking its position, slightly apart from the other instrument roles.

If the One Drop, with the usual strong first beat left out, suggests that the Babylon system has no real power, than Rockers seems to suggest that the oppressed people themselves are beginning to have equal power to the oppressors, by having more of the beats almost equal to each other. Giving each beat equality and strength represents the newly found confidence in Jamaican independence and the worldwide growing acceptance and respect for Reggae and The Rastafarian culture.

Peter Tosh’s Bush Doctor is a good example of the militant Rockers style. Demanding that Marijuana be legalized in Jamaica and claiming himself as the Bush Doctor, you can hear the confidence and pride that goes well with the Rockers style.       You can also hear the use of some electronic sounds on the keyboards, which fit in well with Sly and Robbie’s style, which was often perceived as almost mechanical sounding. They later began to incorporate electronic drums, which led the way towards Ragga and other electronic Dub styles.